gruenesschaf
#162055
We'll attempt another style overhaul, for now just the announcement to explain the goals and principles behind it.


Mandatory Goals:
Regardless of what else is decided, these are things that will happen as the current situation can more or less be called buggy.

Style requirements will be changed
The client automatically applies the requirement indicators based on the used style icon and we consider it very much desirable to have those indicators match the actual requirements, to keep consistency this will mean taking the live requirements and chains.

Style Chains
Streak avoidance makes 3+ chains even more difficult to hit than they should be. We consider the streak prevention to have greater value in general and therefore we will cap positional style chains at 2. That is pretty much the case for almost all style chains with the live requirements (and aside from consistency a big reason to go there).
This would leave us with 5 more chains that have 3 parts, after evade in cstrike, after evade and parry for svg and the pa and bs1 chain. Here we’ll probably go with making the 3rd style an alternative follow up for the opener with increased damage and/or alternative effects to reward speccing higher.

Switch to the more accurate style damage formula
This could reasonably be done without noticeable changes to the current damage at common spec levels. In technical terms, we will move away from the approximating single growth rate per style and towards the base value + per spec gain value per style.

Variance
Especially because of the formula switch we’ll disable melee variance again a couple days before the style overhaul actually happens and will keep it disabled, aka always set to 25, for some time to better evaluate the style values. After the evaluation phase variance will make a return, however, it will then be a limited form: instead of rng 0 – 50 it will only be rng 15-35 or 20 – 30.

Overhaul
Then we come to the actual overhaul and the guiding principles for it:

Ideally, for any given class choosing between weapon lines should come down to personal preferences with each line having something unique that’s nice to have but not mandatory.

While the overhaul will unquestionably have an impact on class balance, it's not the driving force for having one in the first place.

To be perfectly clear, these extras - class specific style effects, having something unique per line or alternative mechanics to provide the basics - are just there to not have the lines end up as exact copies of one another that just allow you to wield a different cosmetic item called a weapon (or to hit a different resist type) but even that would be an improvement over the current state.


UPDATE:
Initial first phase available here: https://playphoenix.online/charplan/styles.html
Please ignore everything except for styles and their effects on that charplan, the other parts may or may not be up to date.
The initial phase should cover the mandatory goals while also doing some effort to make more lines usable for many classes. It's expected that there will be something will have been missed or just plain wrong. Please report such issues here in the thread.

UPDATE 2:
Overview for easier style comparisons: https://playphoenix.online/charplan/style_overview.html
Fri 14 May 2021 1:13 PM by Centenario
#162057
I think the easiest would be to show an example, I suggest starting with the taunt style and explaining clearly what you would do:
Q1: would the growth rate be the same for each realm?
Q2: would the to hit and defense modifiers and endo cost be standardized?
Q3: Mid being able to use these styles with 2-handers would that have any implication?
Q4: Level standardization? 29staff = 0.7 GR? 12(2hand) or 12(polearm)= 0.59 like lvl 8slash/crush/thrust styles

Already on alb we can see differences between crush/thrust/slash making the crush taunt style superior for instance tanking, just cause of superior to-hit bonus of 10
I also forgot the flexible weapon taunt style. Very Important, since reaver is like savage very bad when in front of the target 1v1. Boosting taunt style for them would have big implications for the class. 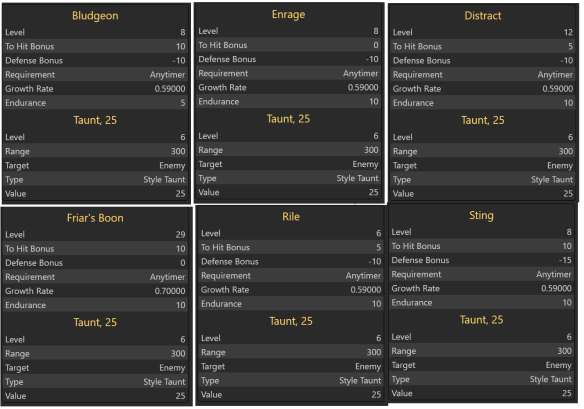 Already we have seen that giving mercenary backsnare has lowered the importance of armsman in caster groups:
Maybe boosting the anytime snare of armsman to longer duration than the mercenary would make him 100% more a valuable than a mercenary for peel.
Yet keeping mercenary viable for peels.
Mercenary being a +peel/slam/guard/++dps (dual bonus) role
While armsman a ++peel/slam/dps/stoic/DD role
1% contribute 90%
Fri 14 May 2021 1:17 PM by


It seems reasonable to unify things that are conceptually already the same. That means it would make sense for taunt styles to have +hit, -defense and potentially lowish damage (compared to other anytimer/positionals). As far as the endurance cost go, it's possible that low endurance low damage might become a gimmick for one line and high endurance high damage a gimmick for another but it's also conceivable that the taunts will end up similar in cost.
However, given that taunt is very much a basic necessity for a weapon line it's also conceivable to be covered by an "alternative mechanic", if only for a test. Fundamentally we will come up with a hopefully sensible effect distribution in general and with a separate effect distribution that depends on alternative mechanics.

gruenesschaf wrote: ↑
Fri 14 May 2021 12:28 PM
Style Chains
Streak avoidance makes 3+ chains even more difficult to hit than they should be. We consider the streak prevention to have greater value in general and therefore we will cap positional style chains at 2. That is pretty much the case for almost all style chains with the live requirements (and aside from consistency a big reason to go there).
This would leave us with 5 more chains that have 3 parts, after evade in cstrike, after evade and parry for svg and the pa and bs1 chain. Here we’ll probably go with making the 3rd style an alternative follow up for the opener with increased damage and/or alternative effects to reward speccing higher.


I think you're missing a few multiple part chains...

What is the plan with Blizzard Blade? That is a three part chain and would certainly have a very large impact on balance if you start toying with it.

*EDIT
I just reread your post, and if I'm understanding this you're going to adopt the live server style requirements? Does this mean a total rework of Flexible and Scythe?
Fri 14 May 2021 2:02 PM by byron
#162065
Don't know how it will go but I would like to thank you to try to keep this game fresh with events and custom changes . I was not always agree with all the changes implemented but I prefer like this that having the same mechanics over and over forever, at least a test period should be accepted by all the players. Saying that, I hope that basic traits of each class will be still visible, for example a zerk is not a blademaster that is not a mercenary too. Every class on each realm have its pros and cons and for example the new back snare style of mercenary was not in this direction (one change I was not agree with).
Fri 14 May 2021 2:06 PM by NunchuckNunyas
#162066
These changes seem well thought out and reasonable. Not to mention very much needed for certain spec lines that are just not viable currently. Also, it's very tough to pull off a 4 style or even a 3 style chain in rvr/pvp so that will be great to have a reduction there! I appreciate the work that went into this and thank you for not giving up on getting these changes into production!
Fri 14 May 2021 2:08 PM by Lail
#162067
Simplify and unify, but try to keep unique mechanics for each weapon archetype. Sounds good, but surely not a simple task.!

However, I really like the slow and thoughful pace of realizing this monsterous project.
This is what i read between the lines: Announce - Tinker - Ask/Test - Modify - Implement.
Sounds great. Should prevent a second "Toy desaster" and will improove the game.

Magesty wrote: ↑
Fri 14 May 2021 1:54 PM
I just reread your post, and if I'm understanding this you're going to adopt the live server style requirements? Does this mean a total rework of Flexible and Scythe?


We are going to adopt the requirements and hence chains (except the mentioned remaining 3 part chains), however we're not going to take all effects as live has them. There will be some overlap however as live also did the "lines should have the basics" thing. For reaver / vw in particular the effect overlap with live will be very high. The most notable exception will be no front root for the vw and no armor effectiveness debuffs in general, the other live effects look reasonable for scythe and flex and are for the most part present in the current lines.
Previous Next

Return to Planned Changes or the latest topics