Started 21 Jul 2021
by bculpepper
in Ask the Team
Wed 21 Jul 2021 10:31 PM by bculpepper
#165424
I don't know if this is a bug or normal. I am playing a Skald with 2H Hammer so I have a slow swing speed. I parry a blow. I would expect my next swing to land a parry reactive if I have one queued, but it does not. It seems that it only checks the last time an opponent hit you to do a reactive?

See the screenshot. I would have expected my next swing to be Revenge and not Comminute. 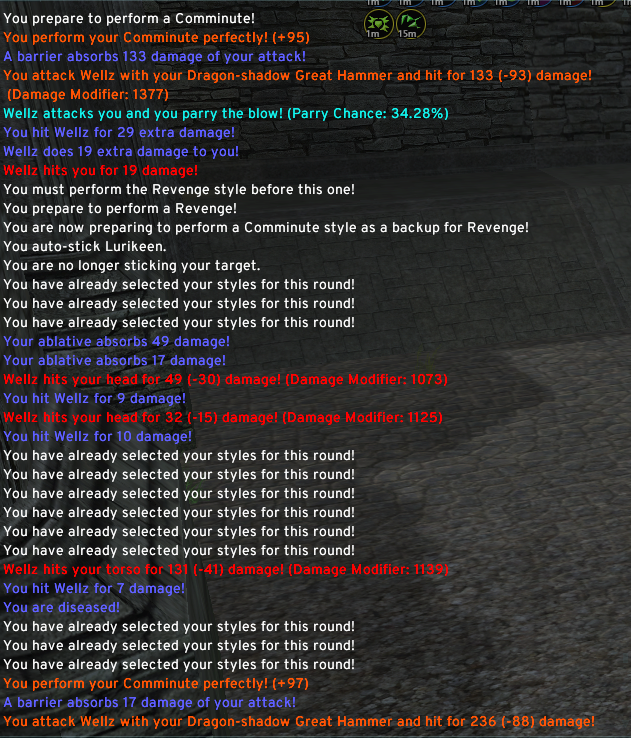 Thu 22 Jul 2021 12:50 AM by boridi
#165427
Looks normal to me. Sometimes you can get off the parry style after the second opponent swing (must be some kind of intentional delay coded in), but the opponent got a second and third in...
Thu 22 Jul 2021 5:47 AM by Sepplord
#165429
the classic behaviour was that you could do reactives until the enemies next style
this lead to (for example) someone evading -> evadestunning, and then since their target was stunned and didn't attack again, you could do evadestyles over and over again until the target attacked you again

They intentionally changed that behaviour here to make it a more direct 1to1 relation, aka 1parry = 1parrystyle while simultaneously making it easier for slow 2hand attackers to hit a reactive.
I am not 100% to what system they changed it back then, iirr every defensive move opened a timewindow, in which your first attack could be the reactive style. This is probably an edgecase where the defensive action happens directly after an attack, so the fullswing time goes through, coupled with a really slow attackspeed resulting in the timewindow already being over again.

I thought the way the reactive system worked was that I would swing - then any reactive that happened until the next swing would be available. Once I swing again the reactive pool is cleared out and we start again. There would be some amount of time that would cause the reactive pool to clear so that you can't parry and then run-off and come back 30 seconds later and hit an off-parry style. If what I am describing is correct, I don't know what the time limit is and with all the ASR running around out there I would request it be increased as its a 'nerf' to 2-H users.


afaik that was changed, but i can't find the corresponding comments/threads anymore
it was pretty early
Thu 22 Jul 2021 4:09 PM by Nephamael
#165440
I think it is a fix time window for your reactive.

Return to Ask the Team or the latest topics