Started 13 Jun 2021
by Saroi
in Ask the Team
Sun 13 Jun 2021 1:15 AM by Saroi
#163833
To start off, I was fighting an Inf and he vanished. I used SL pot and found him immidiately and he began to attack me back. I found this a bit odd, so I did some investigation and found what actually happened.

Purge removes the disarm/silence effect from vanish. Meaning you can attack right away. I did some testing on dummies and if you vanish, purge right away you are still in superstealth the full duration and you are able to attack without beeing seen. You are also able to spam PA/Backstab 2. If you have like vanish 4-5 as an example, you can basically hit an enemy 5-6 seconds without him fighting back.

2019-06-29 Saturday
- the effects of sos, vanish, adrenaline rush, dashing defense and divine intervention now count as positive effects and can be cancelled

I found this in patch notes, saying something about effects being cancelled. I am not sure if that is about the silence/disarm. That is why I am writing here in ask the team if that is really intended or should I make a bug report as this is a bug?

Did this with a lv 49 NS, no buffs. Got 3 attacks off. 2 in superstealth and 1 after the superstealth ended which then made me unstealth. 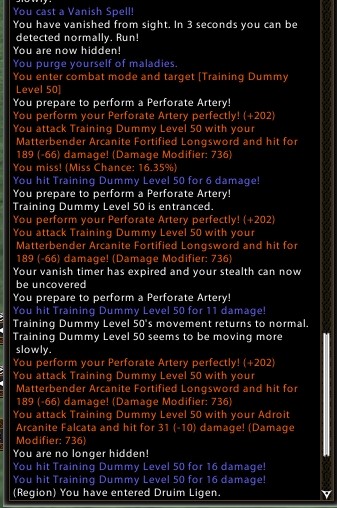 gruenesschaf
#163845
The 2019 patch note is not that, that's literally just being able to cancel the super stealth (which is not something any reasonable person would ever do).

This weird interaction was basically introduced with:

Superstealth cannot be broken, disarm is purgeable, now being able to purge while silenced allowed this interaction. The fix is to special case the vanish disarm and silence to not make it purgeable.
Sun 13 Jun 2021 9:13 AM by Saroi
#163846
Thanks for the reply and fix
Yarna is not nice
Sun 13 Jun 2021 9:40 AM by Astaa
#163847
Excellent, thanks.
Pagan Death Cult

Return to Ask the Team or the latest topics